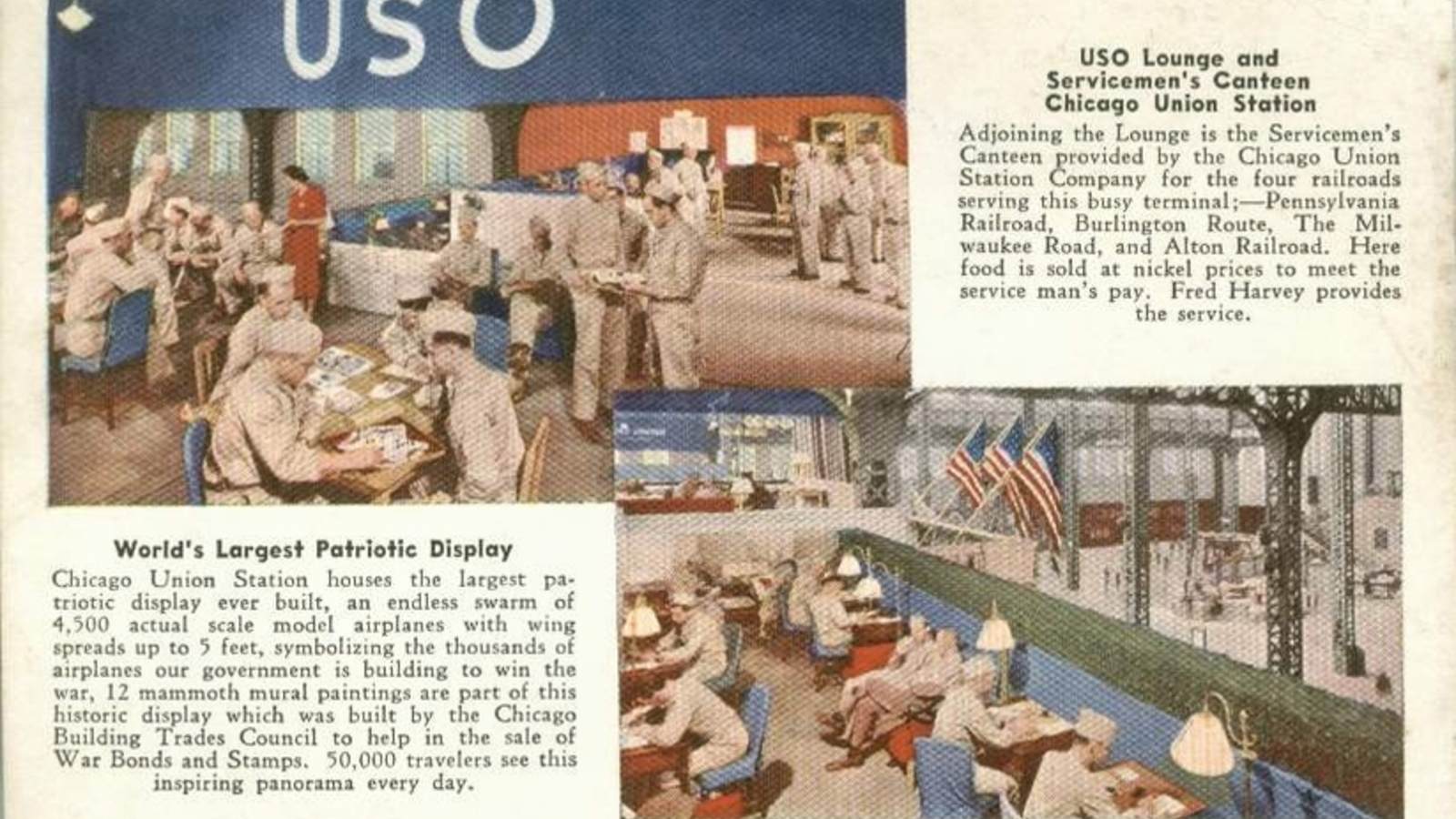 The United Service Organizations (USO) was founded February 4, 1941. Incorporated in the state of New York, six service agencies came together to bring the USO to life. These six motivated agencies are: YMCA, YWCA, National Catholic Community Service, National Jewish Welfare Board, Salvation Army, and National Traveler’s Aid Association. In six short months after its founding in New York, on August 7, 1941, the Chicago Servicemen’s Center is launched by the Chicago Commission on National Defense through Mayor Edward J. Kelly. Though operated by the City of Chicago, the center was supported inside the Elk’s building at 178 W. Washington St., in downtown Chicago.

While support for our service members was thriving in Chicago, the USO established its first USO club in Fayetteville, North Carolina, home to legendary Army base, Fort Bragg on October 13, 1941. Fort Bragg, to this day, is one of the largest military bases in the world.

Soon after the opening of the first USO club in North Carolina, Chicago opened two USO clubs, within a few weeks of each other– the first USO club at the Illinois Central Railroad Terminal at Roosevelt Road in April of 1942, and the second in the historic Union Station on May 20, 1942.

Keeping pace with the needs of the military community, the USO Servicemen’s Center opened at 131 South Wabash on May 27, 1942, only a week after the club at Union Station opened. With over 20,000 square feet of morale boosting dance halls, driving ranges, movies and a fortified, service members found their share of “R&R” and then some. Rented from Norman E. Bensinger for $1 per year, the facility remained open through the duration of WWII.

In the summer of 1942, just as the war overseas was escalating, so were activities at the new Servicemen’s Center in Lincoln Park. Located at Fullerton Avenue and Lake Shore Drive, the City of Chicago operated a full-on service member’s beach resort with outside tents, cottages, outdoor pavilion, dance hall, canteen and even swimsuits for our warriors.

With the close of World War II on December 31, 1947, all USO clubs and facilities closed. All operations were terminated by the World Board of Governors and less than two weeks later, the USO is given an Honorable Discharge by President Harry S. Truman.

The USO is back in July of 1948. The call of duty rings once more and the USO is reactivated for the Korean War under a Memorandum of Understanding between the President and the Department of Defense, led by Secretary of Defense Forrestal.

Shortly after, in the blazing Chicago summer, a sister organization called the Chicago Servicemen’s Club opened at 308. N. Michigan Avenue under the operation of the Chicago Associated Services Committee. The club was not an official part of the USO, but the idea was the same: serve and provide for those who sacrifice for the freedom of the American people.

Under the direction of Stuart McCutcheon, the same wartime director as the USO, The Chicago Servicemen’s Club played an important role in giving back to our service members. This Club existed until January 18, 1951, when control of operations was transferred to the USO.

In the years spanning 1962 and 1963, the National Ad Hoc USO Survey committee was formed under the direction of President John F. Kennedy to study whether organizations like the USO were needed in peacetime and if so, how would they be funded. The Hannah Survey, named after chairman Dr. John A. Hannah, determined that the need for the USO in peacetime was necessary for those serving abroad and at home.

From 1963-1972, USO’s worldwide supported service members during the tumultuous times of the Vietnam Era. Meanwhile back on the homefront, the USO Illinois Woman’s Board is formed. Mrs. William H. Arnold served as the first Chairwoman, accompanied by Mrs. Walter J. Cummings in 1965. Four years later, in 1969, the USO makes its grand opening at O’Hare International Airport.

A decade later, on December 20, 1979, President Jimmy Carter signed the USO’s Congressional Charter. This act aptly says that in times of peace, the USO is always a driving influence in the lives of our service members.

The USO continued to develop its presence in Illinois, dedicated to a mission of how best to ‘serve those who serve.’ In August of 1985, the USO facility at Naval Station Great Lakes held its grand opening in Building 27. Following the opening in Great Lakes, the Woman’s Board of the USO Illinois is absorbed into the parent, USO Illinois Board of Directors.

During the months of September 1990 through May 1991, USO’s across the world once more provided invaluable support to the brave men and women deployed to the Middle East in support of the Gulf War. A new USO facility was established on August 21, 1991, at Midway International Airport to support military and military families traveling through Chicago’s second airport.

In September of 2001, once again, USO’s across the nation and throughout the world answer the call to serve our warriors in support of Operation Enduring Freedom. Recognizing the benefit, a USO could provide at Illinois’ top tourist destination, the USO Illinois opened a new site in Chicago’s historic Navy Pier on June 14, 2002.

To better serve military on the go, in need of respite, the USO Illinois opened its the USO American Airlines Cyber Canteen in O’Hare International Airport’s Terminal 3 on Friday, December 10, 2010. Thanks to the support and partnership of American Airlines, the facility is unlike any other in the nation, with the special advantage of being inside of security, so service members can access the facility with ease as they are traveling.

Less than one year later, the USO Illinois opened its 6th facility, USO Rock Island, in September of 2011 on Rock Island Arsenal, Rock Island, Illinois. The facility is positioned to support a vibrant military community in the Quad-Cities area, over 50,000 military and military family members within a 150-mile radius.

Today, the USO Illinois serves nearly 350,000 active duty, guard and reserve military and military families. With over 300 programs and services offered year-round, the USO Illinois operates 8 facilities powered by a network of over 700 dedicated volunteers who donate $1,270,000 of their time annually. The USO Illinois is a civilian 501c(3) registered non-profit that is supported by the generosity of the America people.